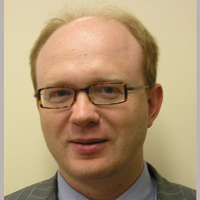 With lung cancer becoming increasingly and worryingly prominent in non-smokers, Consultant Medical Oncologist, Brian Bird, says better screening and use of our own immune system are vital areas of innovation for the future.

Lung cancer is one form of the disease where the common cause is thought to be relatively unambiguous. Smoking, along with other big risk factors such as asbestos exposure, are commonly associated with the onset of the disease.

However, Dr Brian Bird, Consultant Medical Oncologist at Bon Secours in Cork, says there’s a worrying trend rearing its head among the patients coming through his doors.

“We’re seeing more and more male and female non smokers, young people, coming in with lung cancer. As it stands, the reasons for that are poorly understood.”

These non-smokers or light smokers are also more likely to have a ‘druggable mutation’, a mutation in the tumour that can be targeted with specific treatment.

“There’s often a switch that gets jammed on in a cell, commanding it to divide and grow. If you can turn that switch off, it can enable people to live with the disease for years with less of an effect on quality of life,” Bird says.

As with many cancers, finding the disease early can lead to more effective early treatment. Screening for lung cancer in those most at risk could have an enormous impact on the death rate caused by the disease.

“With those who’ve smoked heavily for 20 or 30 years, even if they’ve stopped smoking, providing annual chest CT scans can reduce lung cancer mortality by 20%,” Bird says.

This will enable more oncologists to stop cancers spreading and becoming less manageable.

“Catching it early helps us establish whether we can simply cut it out or – if that’s not an option – use radiotherapy to essentially ‘cook’ the tumour, which is almost as effective as surgery itself.”

Better screening and treatments are seeing lung cancer patients’ quality of life improve, despite there being room for further innovation in both areas.

Screening through blood tests would mean less exposure to radition for patients, but this is something that’s still a way off being available.

Currently, much focus is on alerting and enabling patients’ immune systems to fight their lung cancer. It is an area of constant development.

Our body’s immune system constantly receives messages to ‘stand down’ where it’s not needed. Cancer can manipulate these ‘brakes’ put on the immune system, meaning it can divide and spread unchecked throughout the body.

A core area of focus, it’s thought that between 20 – 40% of patients benefit from immunotherapy.