Breast cancer and ovarian cancer provide different challenges for oncologists. One is very common, the other is rare but harder to cure. Now, genetics and personalised care are helping to tackle both head on. 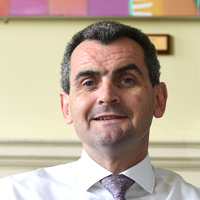 Since 2008, a mass centralisation of cancer care in Ireland has seen change in breast and ovarian cancer treatment.

Breast cancer and ovarian cancer in Ireland both provide their own challenge.

Breast cancer remains the most common form of the disease in women. It accounting for 17% of all cancer deaths in Ireland. However, the survival rate continues to improve with the figure now around 80%.

In ovarian cancer, the death rate is roughly 65%. New ways of treating both diseases will aim to make treatment more personalised; a vital innovation according to O’Reilly.

“You’re looking for genetic changes in the patient’s cancer that are targetable, that’s the holy grail for cancer treatment.”

In both breast cancer and ovarian cancer, precision therapy is helping to enhance and improve existing treatments.

Based on a greater genetic understanding of an individual’s cancer, treatments can be modified to best target genetic changes occurring in a patient’s cancer cells.

Breast cancer and the Her2 gene

In breast cancer, an increased presence of the ‘Her2’ gene causes cancer tissues to multiply faster. This occurs in roughly 25% of breast cancer cases.

‘Her2 testing’ establishes whether someone is ‘Her2 positive’, meaning they have the specific gene abnormality that can play a role in the development of breast cancer. Treatment then targets this genetic abnormality directly.

“In someone with Her2 positive breast cancer, their cancer is likely to come back more quickly than in others. We can now target that abnormality and we’re seeing the better results from that,” O’Reilly told me.

Ovarian cancer and the PaRP gene

In ovarian cancer, medicine has been developed to prevent cancer cells from being able to repair themselves.

PaRP (poly-ADP ribose polymerase) is a protein that aids cell repair. PaRP inhibitors, the treatment being used in both ovarian and breast cancer, specifically prevent that protein from doing its job on cancer cells – helping to kill them off.

In light of the increased personalisation of care, O’Reilly stressed that innovation must focus on making these treatments more repeatable and accessible in order to maximise their impact.

“Immunology is another area that will play a huge role in ovarian and breast cancer. The challenge with all these new treatments is making them universally accessible, and affordable.”