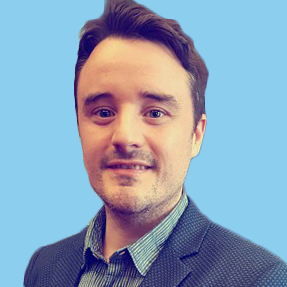 “I’ve found that many people see migraine as a ‘female condition’. While it is more prevalent in women (8:1 ratio), men do suffer migraine and it has an equally debilitating effect on our lives. Some individuals have even said quite disapproving things to me about it, basically questioning my manliness.”

“There are friends in my life who simply do not understand. By a comment or look you sort of know that is one barrier that won’t ever come down.”

The migraine aura makes me feel nauseous just to think of

“In my younger days, the migraine aura looked like a colourful version of ‘TV static’ – flickering, colourful snowy blotches that I would see in my peripheral vision. In adulthood, it more accurately resembles zigzag, pulsating lines, expanding from the centre of my vision outwards. Just thinking about it here is making my stomach feel sick. It’s absolutely horrible.

“Once a migraine has set in, the pain is so bad, I can only text, ‘Migraine’ if people try to get in touch. Then it’s several hours of nausea and vomiting.”

Teenage hormones can increase the intensity and frequency of migraines

“The years between ages 7-15 were the worst of my life in terms of migraine attacks. Very few people understood what I was going through, which caused a lot of additional stress. In hindsight, I realise, I was depressed.”

Even onions can trigger a migraine!

“Triggers for me include extreme changes of weather or barometric pressure, humidity, lack of routine, long gaps between meals, dehydration and, bizarrely, the smell of onions.