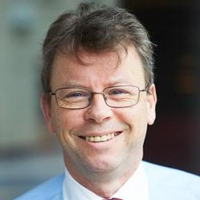 Chief Executive of the Irish Haemophilia Society, President of the European Haemophilia Consortium

Ireland is taking a leading role in the development of exciting new Irish haemophilia treatments and gene therapy. This is raising the spectre of a ‘cure’.

This gives real promise to a future for people with haemophilia that “has never looked so bright,” says to Brian O Mahony, Chief Executive of the Irish Haemophilia Society (IHS), President of the European Haemophilia Consortium, and a person with first-hand experience of the condition.

The IHS exists to give a voice to people going through Irish haemophilia treatment. They also provide help and support patients need to live as fully as possible with this life-long condition.

In haemophilia, people inherit a defective gene. This causes the liver to not make enough of a protein factor that allows blood to clot. There are two main types of haemophilia, A and B, categorised by he blood clotting defect.

Symptoms of uncontrolled haemophilia include bleeding that takes a long time to stop and oral health problems. Also including skin that bruises easily and pain and stiffness around joints, such as elbows, because of internal bleeding.

People with haemophilia can experience limitations to daily life. They need to take regular injections, to avoid contact sports such as rugby, and to take care with common medicines. As a child growing up using Irish haemophilia treatment, Mr O Mahony remembers missing a lot of time in school.

Current standard preventative care involves intravenous injections of replacement coagulant up to three times a week. Furthermore, if a bleed does occur, there are different treatments that can be combined.

People who inject themselves regularly can experience problems with vein damage, pain, stress and limitations on quality of life.

Through the IHS, people with haemophilia are given a formal say in product development and marketing, and with exciting results. There are currently eight companies developing gene therapy for haemophila aiming to reduce the current injection schedule.

Missing DNA is injected into the liver, which can then manufacture the important blood clotting factor, in gene therapy for haemophilia. The longest established and most successful gene therapy trial to date is that of University College London and the Royal Free Hospital in London. They have already treated 10 people with severe haemophilia type B and achieved steady effective coagulation rates of between 1% (minimal protection against uncontrolled bleeding) and 6%, following a single injection given up to five years ago.

Their work has prompted several other companies to begin work on gene therapy.

Ireland has an enviable record in leading the way in novel therapy use. Since 2017, Ireland has scored two firsts by switching people with both types of haemophilia to first generation longer-lasting ‘extended half-life’ (EHL) treatments, and take-up of these drugs continues to grow.

Other approaches under development include the possibility of subcutaneous injections, which are less complex and avoid vein damage, even for people with the hardest-to-treat forms of haemophilia.

Mr O Mahony describes this as “a very exciting development. For the most part, this group of people have more bleeding episodes and a marked reduction in quality of life. It is timely to see better treatments emerge for this greatly under-served population.”

Drugs that mimic the effect of the defective blood clotting factor are also being studied. Consequently, some of these trials are achieving a 100% reduction in bleeds with only mild or moderate adverse effects.

This, says Mr O Mahony, raises the enticing prospect of an effective cure for haemophilia. Such as, “there is a real possibility of transforming the quality of life for people with haemophilia in the next 5-10 years.”