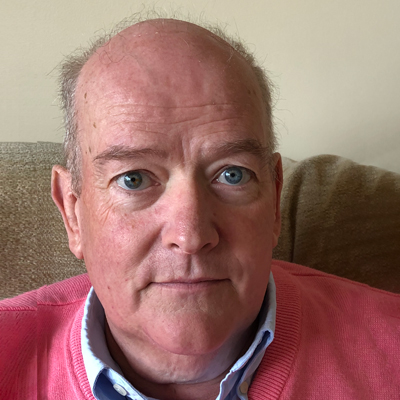 Retired bank manager, Liam McGonagle, was enjoying his retirement. From golf days to spontaneous trips out, he made the most of life, so, when his shoulder started to ache in January 2019, he felt confident it would pass.

“When the doctor told me I had myeloma, I thought he was talking about sun damage; I’d never heard of it before,” says Liam. The 61-year old from Ireland only went to see his GP after suffering from a chest infection.

Within days, he was in his local hospital and had a biopsy to confirm the diagnosis. “A side effect of the myeloma was a negative impact on my kidney function, which I later discovered was a major concern for my haematology team.” He says: “I can’t remember those first few days, but when I came round and they showed me my chart I thought it was someone else’s!”

“I’d never been ill before”

Although Liam had regular checks for his blood pressure, he had never taken more than three days off sick in his career. “It was a huge shock,” he says. “The medical team were amazing though and I think we caught it just in time.”

Multiple myeloma is often hard to diagnose because the symptoms are vague. Early treatment is key, as is positivity and determination from the patient.

Liam set himself goals/milestones to focus on as his chemotherapy treatment commenced, with the big prize being stem cell transplant treatment, which is due to take place shortly.

“I have to really think about situations now”

While his condition has improved, Liam has had to go through a huge change.

He says: “It’s hard not being able to just jump in the car any more, to attend football matches, concerts etc, as I have to be very aware of possible infections from being in crowds. Family and friends have been a tremendous support to me throughout my journey and, truthfully, without that support network, I am not sure I would be as far on as I now am.”

Liam believes that, had he not had that chest infection, his myeloma diagnosis may have come too late. “I was just putting up with the shoulder, like men do. But now I see it as a warning light like you get in a car. And even if it goes away again – you should always get a warning light checked out.”