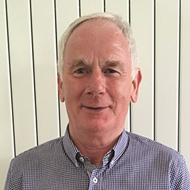 You’d need to travel far and wide to find someone with a biography as interesting and diverse as that of Frank Delahunty, former Defence Forces Commandant. The Kilkenny native has packed several lifetimes’ worth of experience into a whirlwind 71 years.

Four decades of service with the Defence Forces saw Delahunty rise from apprentice to Commandant.

Upon mandatory retirement at the age of 56, Delahunty took up a post as a court crier with the Courts Service.

Delahunty’s life entered its latest phase in 2017, when he became a founding member and vice-chairman of Thomastown Men’s Shed.

Many Men’s Shed members report that participating in a shed has a positive effect on their health and wellbeing – a fact to which Frank Delahunty can attest. Delahunty’s health difficulties began innocuously enough in 2004.

“I’d always been in good health until I began to notice that something was wrong that December,” he says. “At first I thought it was just heartburn. The burning sensation got worse in 2005 and I was whisked to hospital twice, only to be told there was nothing wrong.” I kept going to the shed. I find it takes one out of oneself.

Delahunty’s instincts proved accurate: “I protested that something wasn’t right, and I was kept overnight in St. Luke’s Hospital in Kilkenny. They did a stress test, and it was clear there was a serious problem.” Delahunty was moved to Blackrock Clinic where an emergency quadruple bypass gave him twelve further years of “good, healthy, active life” before angina struck again in 2017.

“By this time,” he says, “I had a natural interest in the Men’s Shed movement. I had four stents fitted but I kept going to the shed. I find it takes one out of oneself. It takes away the despondency and the ‘black dog’ that sometimes comes with a heart condition. I’ve got a life to live and I’m going to live it.”

Now the Co. Kilkenny Shed Support Volunteer for the Irish Men’s Sheds Association, the support of Delahunty’s shed-mates has also been crucial to his recovery. “People will come over discretely and ask ‘how are you getting on?’ Four of the men have military backgrounds – the camaraderie is similar to the army”.

Delahunty describes himself as “deeply embedded” in the shed and is determined to wring every last ounce of joy from it. “I’m 71. I don’t have a long career ahead of me,” he laughs.  “If I don’t do it now, I might not do it.”

Sheds themselves are community-focused, member-driven spaces where men of all ages and backgrounds come together to share skills and make new friends.

What is a Men’s Shed?

For those unfamiliar with the concept, the men’s shed movement originated in Australia in the mid-90s.

Having arrived in Ireland as recently as 2009, there are now over 400 sheds spread throughout the length and breadth of the island.